In this section, one can find the developer’s introduction to state expansion pipeline used in Thoth’s adviser that expands states to produce pipeline products.

The pipeline is used to prepare, generate, filter and score partially or fully resolved software stacks, abstracted into a State. The pipeline is run within resolver and can be triggered by two main methods:

An example of a resolver run that runs the pipeline under the hood for computing recommendations:

As you can see above, the resolver has quite a few arguments to be passed:

See this Jupyter Notebook that demonstrates how pipeline is constructed and how the resolution process uses it to resolve software stacks meeting the desired quality.

Before any resolution, resolver calls Unit.pre_run method that can be used in any pipeline unit implementation to signalize a new resolution. It’s a good practice to set any initialization here as pipeline units are instantiated once per resolver. If there are run multiple resolutions for the same resolver instance, the pipeline unit instances will be shared.

Check the linked Jupyter Notebook if you wish to dive into sources.

All pipeline units are grouped based on their type in the PipelineConfig and resolver runs with respect to their relative ordering when pipeline units are executed. Pipeline units specific for a certain packages are prioritized in oposite to the generic ones - see the units section for more info.

Once all Boot units are successfully executed, resolver resolves all the direct dependencies (that are sorted and filtered out based on limit_latest_versions configuration option) of the application and executes pipeline units of type Pseudonym to compute “pseudonyms” for packages (packages providing same functionality but have different name or different version identifier). See pseudonyms section for more info.

The next pipeline units of type Sieve filter out packages that should not be considered during resolver run. See sieve pipeline unit documentation for more information.

Once sieves filter out packages in unwanted versions, resolver creates initial states that are formed out of all the combinations of packages in different versions that can occur in a software stack considering also pseydonyms computed. As packages in different versions are sorted based on their version string semantics, the very first combination has always the latest versions of all the packages (this fact is used for example in hill climbing or in the adaptive simulated annealing approach). For each newly created initial state, there are run pipeline steps that decide whether inclusion of a package version is valid to a state and if so, what is the quality of such a resolution step - this is done for each and every package-version combination.

If all the steps on a state accept the given package, a newly created state (this corresponds to taking an action from a state to a new state in a Markov Decision Process) is added to the resolver beam as a state to be considered during resolver run, respecting beam width parameter.

The resolver then picks a state stored in the beam based on predictor’s decision and resolves not yet resolved dependencies in the state. The resolution of a dependency makes a dependency resolved and all its dependencies, if any, unresolved. Resolver, again, runs all the sieves and pseudonyms on the newly introduced dependencies into the state and pipeline steps to verify and score the given resolver step.

There are three main abstractions that are fundamental when creating any pipeline unit or predictor for Thoth’s adviser:

Beam is an abstract data type maintained by resolver that keeps track of pool of states that are about to be (possibly) resolved. This pool can have restricted width which limits the number of states kept in memory and limits number of states considered during resolution.

It’s possible to request a history plot for the beam size and the highest rated stack score for introspection purposes using the --plot option or by calling Beam.plot. The figure below shows beam history during resolution of 1000 TensorFlow software stacks by sampling the state space using adaptive simulated annealing. CVE penalization was the only pipeline step used during the resolution process, resolver did approximately 2500 resolution rounds to score 1000 software stacks (limit parameter to adviser). 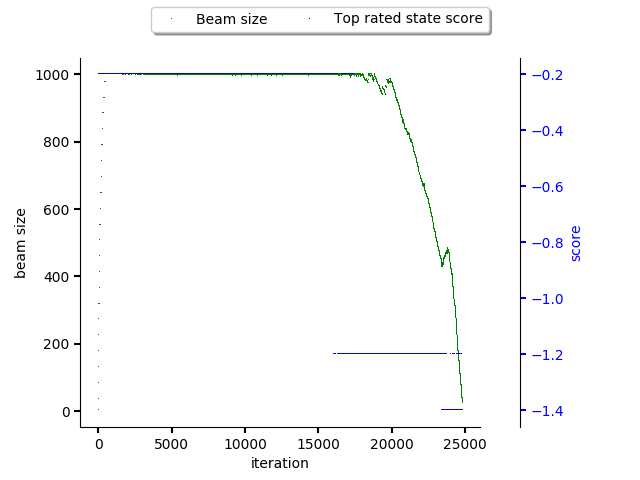 As can be seen, the beam limited number of states taken into consideration until approximately 18000th round. After this round, the temperature in the adaptive simulated annealing started to drop so resolver ended up expanding just the top rated state based on adaptive simulated annealing predictor output (so stack resolution pipeline started to produce more products - resolved software stacks - and reduced production of non-final states).

It’s good to find the right balance for the beam width. A beam that is too small restricts the state space too much which can cause that no software stack is resolved. Too big beam can lead to a very large state space to be explored and consumption of too much CPU time (and actual time) to produce software stacks. See the section discussion beam width.

Each unit type respects relative ordering and units are grouped based on their type - for example the very first sieve added is run first, then a second one and so on respecting the relative order of sieves in the pipeline configuration (the order in which they were included). This logic applies to all pipeline unit types - boots, pseudonymns, sieves, steps, strides and wraps. In case of prescription pipeline units, use should_include.dependencies to respect dependencies on other units. See relevant documentation for more info.

See implementation of PipelineBuilderContext for more info on provided methods that can be used during pipeline configuration creation.

Note the resolution algorithm with pipeline units is shared for computing advises and for Dependency Monkey to test and evaluate characteristics of software stacks. You can use methods provided by PipelineBuilderContext to check if the pipeline configuration is created for computing advises or whether the created pipeline configuration is used in Dependency Monkey runs.

This configuration can be supplied to adviser as well as to Dependency Monkey via CLI or in the resolver constructor when resolver is created programmatically.

Integrations with Thoth (such as Thamos) can use static source code analysis on the client side when asking for advises. In that case, sources are scanned for library imports and library symbols usage (Invectio is used). The gathered library usage captures libraries and what symbols are used from these libraries in sources. This information can be subsequently used in recommendations (in the state generation pipeline) to target recommendations specific to user’s application.

A note to hardware environment¶

Hardware environment is stating what hardware is present to run the given application. Thamos is capable to perform hardware discovery as well (besides software environment discovery). An example of hardware environment configuration can be GPU or CPU type. Any request done to Thoth backend automatically carries the hardware information that is detected if Thoth’s official integration tools were used.