In the upcoming section you can find discussion and intuition behind Thoth’s adviser logic and nomenclature used in Thoth repositories, sources and documentation.

Let’s consider an application that has two dependencies - a package called simplelib and anotherlib. These dependencies can be installed in different versions and do not require any additional packages to be installed. Let’s have a function that scores an application based on “how good it is” when different versions of simplelib and anotherlib are used. The semantics for “how good” can be different, but one can imagine scoring based on performance, security vulnerabilities present and/or application misbehaviour (or any other scoring you can come up with).

If we create all the combinations of simplelib and anotherlib that can be produced and we score these combinations using our scoring function we get a discrete results as shown on the following figure: 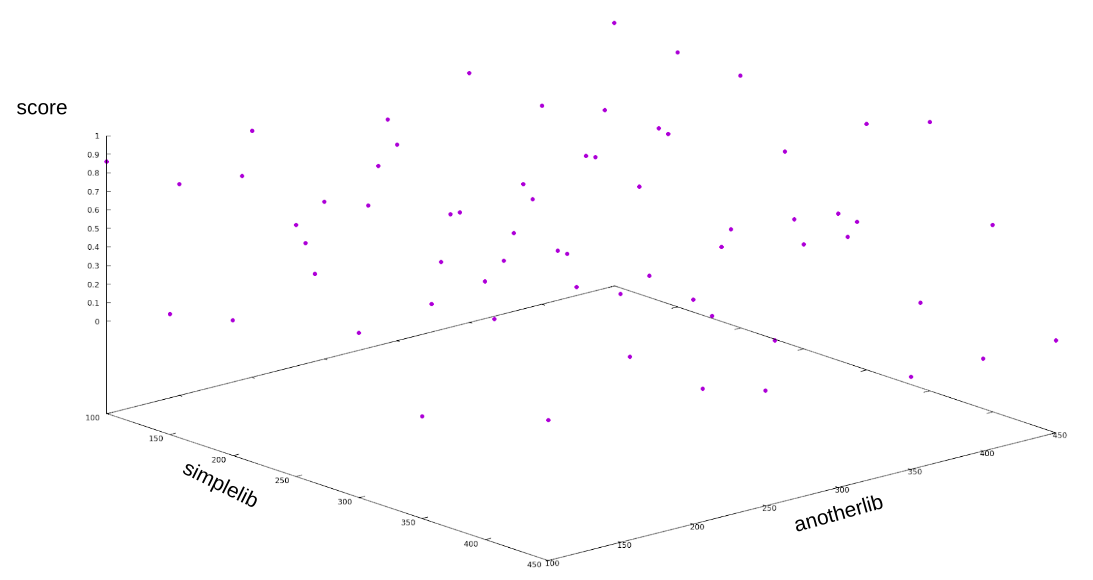 By interpolating these values we get a surface as shown on the next figure, this visualization is also more intuitive: 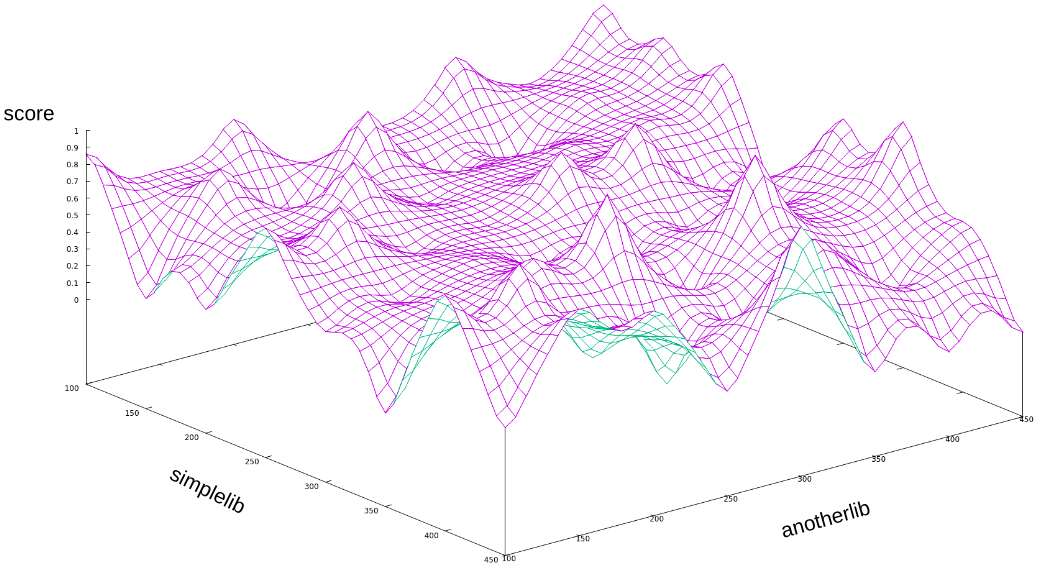 As can be seen, we get different score based on different versions of simplelib and anotherlib combinations. Thoth’s adviser, when computing recommendations, tries to find the highest values of the scoring function - the highest spikes present (assuming the higher number of score, the better software stack is). 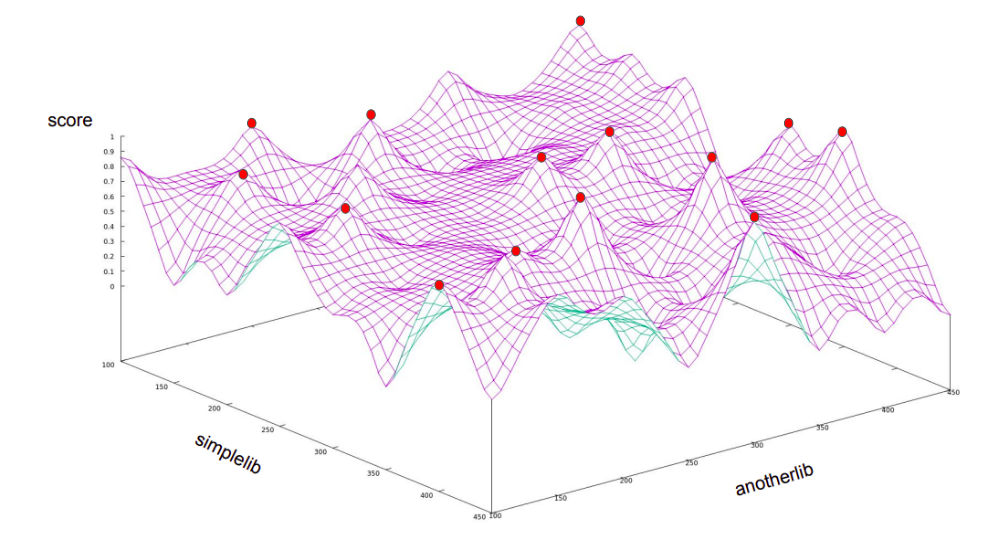 Thoth’s resolver can produce all the combinations of packages, considering Python ecosystem resolution, and can be guided using predictor to find high values of score faster: 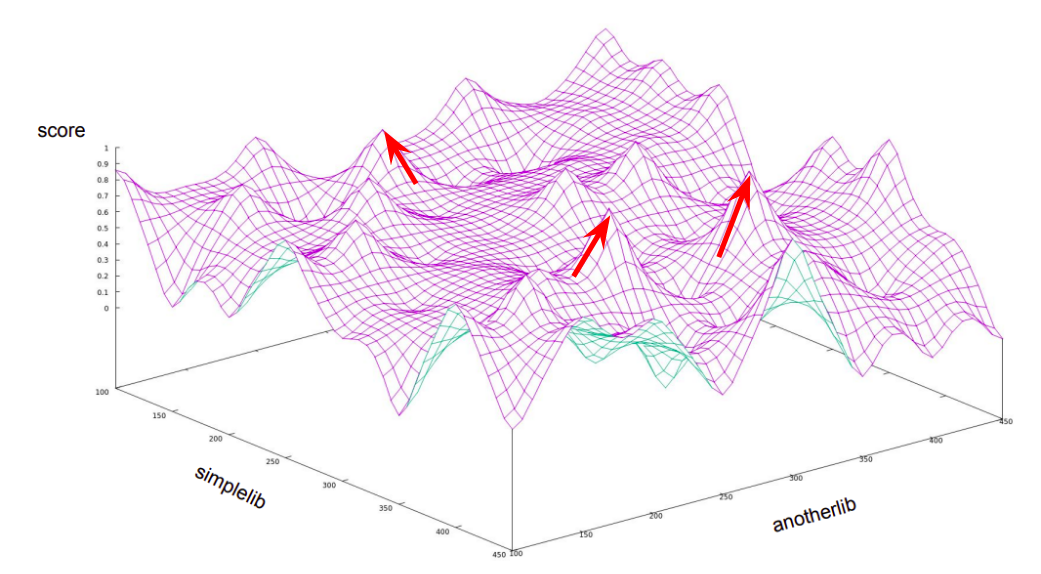 Thoth’s resolver approach of resolving software stacks is to expand dependency graphs (lazily), instead of directly implementing 3SAT problem or backtracking as in case of other resolvers. See resolver documentation for more info.

As stated above, Thoth’s adviser does not implement 3SAT problem as many resolvers do. Instead, the whole resolution is seen as a Markov Decision Process (MDP). Intuitively, any (not necessary fully resolved) software stack can be seen as a state in an MDP and satisfies Markov property:

Any future resolution of resolver’s state depends only upon the present state, not on the sequence of events (resolution of dependencies) that preceded it.

The whole design of adviser’s resolution can be seen as a framework for writing predictors for prediction based resolution.

The state space as described and shown in the previous section corresponds to the score in a terminal state (cumulative score) - when both libraries simplelib and anotherlib are resolved and present in fully pinned down software stacks and there are no more unresolved dependencies (no more requirements introduced by resolving these two libraries).

In otherwords, the function plotted corresponds to Bellman equation for all terminal states following a policy during resolution.

Each entry in the state transition function in the MDP corresponds to a step that is performed by resolver, by taking an unresolved dependency and resolving it.

Pipeline units called steps then act like a critic that scores the given action taken (compute immediate reward signal).

For a more illustrative example, let’s suppose that the resolver is taking an action in some state sn. Let this state be described by unresolved, resolved dependencies and its current score (based on Bellman equation). 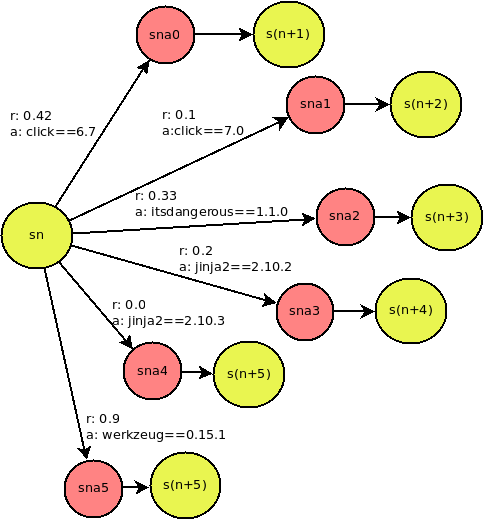 We resolve an unresolved dependency - let’s say we take action sn a2 and resolve itsdangerous==1.1.0, we retrieve an immediate reward 0.33 and we end up in state sn + 3. This action is scored by all pipeline units of type step - a sum of their scores - note that this transition can be also invalidated by any of the step pipeline unit present in the current pipeline configuration.

The new state created is described as follows:

If there would be any other version of itsdangerous in the unresolved dependencies listing, it would be removed (as well as its whole dependency sub-graph) as package of type itsdangerous is already present in the current state respecting requirements.

As can be seen, the main role of sieves is to filter out invalid future actions in the upcoming resolver rounds, without considering any possible state the resolver could end up with (state independent filtering).

If the given action from a state leads to invalid transition, the predictor instance receives reward signal equal to math.nan.

If a valid transition leads to a state that has no unresolved dependencies, the given state is final (terminal state in case of MDP terminology) and it represents a fully pinned down software stack.

If the given action from a state leads to a final state (terminal state), the predictor instance receives a reward signal equal to math.inf.

In adviser docs but also in other Thoth repositories, one can find the following terms: